I received such a great response to my last “is it worth it?” post that I was thinking of making this a new blog series! Let me know what you think down in the comments & share what you’re interested in seeing whether or not it’s worth it next!

Today I wanted to give you the scoop on the popular, yet some may consider pricey, DockATot! We were gifted the DockATot deluxe from a family member at our baby shower. Our daughter slept in it from the first night home from the hospital until she grew out if it. We were just recently sent the next size up, the grand, from DockATot. Thank you, DockATot for collaborating with me on this blog post!

In case you have yet to hear about the DockATot, it is a multi-functional dock with a plush, cocoon-like design that allows for a child to play, sleep, or lounge while bonding and soothing with Mom. It’s pretty amazing if you ask me! My daughter uses the DockATot mostly for nighttime sleep and naps but as she gets older I love using it for playtime. Hopefully she will also learn to chill and lounge with me soon! 😉 The DockATot is made from breathable and non-toxic 100% cotton material allowing for convenience and comfortability. It’s so easy to remove the cover and machine wash for all of life’s little messes.

The DockATot was created to mimic a mother’s womb, providing a nurturing, soothing, and calm environment for baby. As mentioned before, there are two sizes (deluxe & grand) designed to take your baby from 0-36 months approximately, taking them through many transitional stages.

The DockATot is fully complaint with both federal law and U.S. Consumer and Product Saftey Commission proposed standards. It has set a new standard for baby loungers! It is considered a luxury and a necessity for all parents who want their child’s earliest years to be “nestled in a happy and healthy cocoon of comfiness”. Don’t you just love that statement!

Our favorite feature of the DockATot is that it easily travels. The DockATot remains a familiar environment for my daughter to sleep wherever we are. I don’t have to worry about her sleeping habits being negatively affected by an unfamiliar bed. Coming from a Mom with a baby that has very sensitive sleeping habits, this product is a lifesaver! The DockATot is commonly considered a product for cosleeping but we have never used it for that purpose so unfortunately I cannot speak to that experience personally.

Now to the most common question I hear when talking about the DockATot: does it work? To be honest ,and to provide some history, my daughter has never been a good sleeper. Crossing my fingers our next baby is a “sleeper”. Even when she was a newborn, sleep wasn’t the easiest for her. Her longest stretch of sleep was her first night home if that tells you anything. Part of me thinks that her sleep patterns might be related to our birth story as it was rather traumatic. Even before we knew how well my daughter would do at sleeping, the DockATot was a no brainer for us as parents. I wanted my daughter to have the best chance at sleeping well and I wanted her to have the most soothing environment as I knew we would not be cosleeping/bedsharing. I can’t say the DockATot magically allows her to sleep through the night but I can say it makes a huge difference and I know we would be getting much less sleep without it!

As mentioned before, the DockATot is a luxury as some may consider it pricey. Consider it an investment peace towards you and your child’s sleep, comfort and your sanity. 😂 If you’re on the fence about this product, do yourself and your baby a favor and snag one! As a cherry on top, they have the cutest covers right now too (marble cover pictured).

As you’ve figured out, we do love out DockATot! It has not been a “miracle worker” for my daughter, magically making her sleep through the night, but without it I fear her lack of sleep would be even more severe! Hopefully this post has given you enough insight to determine for yourself whether or not the DockATot is the right thing for your family.

As always, I’d love to hear from you all with any questions I may not have answers or comments about your own experiences. Until next time. 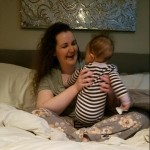 This post was posted in Faves, Mom Life, Reviews

I'm Alyse! Thanks for stopping by our neck of the woods! I'm a wife, mama, and Basset mama who also loves life and sarcasm. On my blog, you'll find honest motherhood, marriage, beauty, and lifestyle topics. Follow along for the journey!

Come Along For The Ride!

Thank you for subscribing!